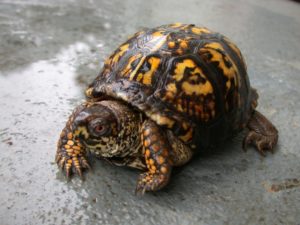 The house I grew up in was only 100 yards from a small pond, and there was a golf course in my neighborhood with several water hazard holes and feeder streams full of life. With so many ponds a short walk or bike from my house, I had many opportunities to explore and discover my neighborhood aquatic wildlife.

Turtles grabbed my attention the most, and on occasion, with the use of my older brother’s long-handled net, I would snag a painted turtle from a pond for closer examination. One time I tried to net what looked to be an eight-inch long snapping turtle. As I was bringing it to shore in the net, it bit its way through the mesh to freedom. That was the last time my brother let me use his net.

I have found, caught, and observed many of the freshwater species of turtle we have here in New England and The Last Green Valley. The painted turtle and snapping turtle are common and frequently can be seen in and around ponds, streams and rivers.

One time my mother stopped the car to assist a turtle trying to cross the road. Together we determined that it was probably a spotted turtle, and later that night we looked it up in one of her nature guide books to be sure.

For my 13th birthday, my friend and outdoors exploring partner Johnny Stewart gave me a small, softshell turtle that he had caught in one of our local ponds. I kept it for the summer and when autumn arrived, I released it back to the pond. I have not seen one in the wild since.

One time while fishing, I reeled in a mid-sized musk turtle. At first, I thought it was a snapper that had grabbed my worm and hook, but my brother identified it as a musk turtle. Field guides today refer to them as “stinkpot turtles,” but I don’t remember if the one I caught had much of a stink to it. I was more interested in getting it off my hook and back in the water so I could concentrate again on the fishing.

A few years ago, I was paddling the French River with members of The French River Connection. One of the paddlers pulled from the edge of the shore a red-eared slider about 6 inches or more long. It looked just like the turtles you find in pet stores, except much bigger. That red-eared slider was the only one I have seen in the wild and for good reason — they are from the southern states and non-native to this region. Most likely it was a pet turtle escapee that had somehow managed to survive our cold winters.

The one turtle on my bucket list that I have never seen in the wild is the eastern box turtle. This a unique species known for its high-domed back top shell (carapace) and a special hinged bottom shell (plastron) that swings shut so tightly that the turtle can completely hide inside its shell, thereby keeping its soft and vulnerable parts protected. This is how it gets its name and it is the only species of turtle in our region with this ability.

The eastern box turtle is predominately a terrestrial species, spending most its time on land including meadows, forests and dunes and occasionally in ponds and marshes. It is active year-round in the southern range of its territory but in Connecticut and Massachusetts, at the most northern end of its range, it is active from April to October. Each turtle typically has a home range of just a couple of acres where it will spend its entire life.

The color pattern of the eastern box turtle is quite beautiful and variable. Both the carapace and plastron are made up of many bones, and these are covered with plates that give the turtle its color and design. Each plate of the eastern box turtle has radiating patterns of light yellow to orange lines or spots on a background color of mahogany or dark brown. Fully mature adults will have a shell length of about eight inches.

Male box turtles have a concave plastron while the female plastron is flatter and slightly convex. Males have longer tails and the claws on their hind feet are shorter. Interestingly, 90 percent of males have red irises while the female’s eye color is brown.

The females will nest in fields, roadsides, cultivated gardens and beach dunes as well as woodlands. They make their nests about 4 inches deep and will lay three to eight elliptically shaped white eggs of 1 1/2 inches long and under 1 inch wide.

Eastern box turtles eat a wide variety of plants and animals, including beetles, slugs, caterpillars, blackberries, blueberries and mushrooms. They hibernate in underground burrows and in our region, they will begin to emerge in late April. They are one of the longest-lived turtle species with an adult lifespan of 50 to 75 years.

You can find helpful information about eastern box turtles from the Connecticut Department of Energy and Environmental Protection. Here is a link to its fact sheet on box turtles: http://www.ct.gov/deep/cwp/view.asp?a=2723&q=416520

“Loss of habitat is the greatest threat to turtles. Some turtles may be killed directly by construction activities, but many more are lost when important habitat areas for shelter, feeding, hibernation or nesting are destroyed. As habitat becomes more fragmented into smaller pieces, turtle populations become smaller and more isolated. Roads bisecting turtle habitats can seriously deplete local populations due to vehicle kills.”

Information for this column was also sourced from the “Stokes Guide to Amphibians and Reptiles,” by Thomas Tyning. I especially enjoy the introductory page to the section on turtles:

“Turtles’ unique design — their ribs fused to their shell and their leg bones tucked inside their body cavity — has been a hallmark of the group since they evolved about 250 million years ago. Turtles were around before dinosaurs, and they watched them emerge, prosper and disappear altogether. Without changing their body plan at all, turtles further observed the rise of birds and mammals. They are still here today, waiting to see what happens to all of us.”

Hopefully someday I’ll discover an eastern box turtle in the wild and take the time to observe one of our region’s more unique and ancient animals. The wild blackberry patch in my backyard is ripening. I need to remember to peer into the tangle of blackberry canes and stalks and, if I am lucky, I’ll see my first eastern box turtle.

Bill Reid is the chief ranger of The Last Green Valley National Heritage Corridor and has lived in the region for more than 30 years. He can be reached at bill@tlgv.org

The Norwich Bulletin is granted first serial rights and associated electronic rights to publish the preceding article. The Last Green Valley, Inc. retains all other rights to the work.