What Is The Last Green Valley? 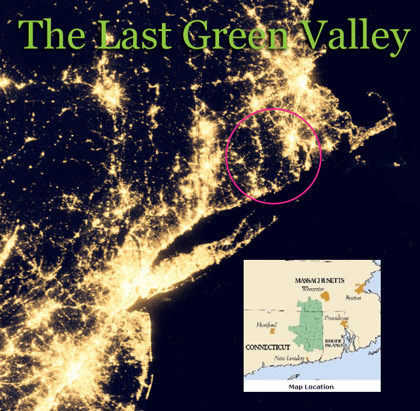 At night, the region appears distinctively dark amid the urban and suburban glow when viewed from satellites or aircraft.  In the daytime, the green fields and forests confirm the surprisingly rural character of the 1,100 square-mile area defined by the Quinebaug and Shetucket Rivers systems and the rugged hills that surround them.  For this reason, northeastern Connecticut and south-central Massachusetts have been called "The Last Green Valley" in the sprawling metropolitan Boston-to-Washington Corridor.

The Last Green Valley is half the size of Grand Canyon National Park and more than ten times that of Acadia, the largest national park in the northeast. Forest and farmland make up 84% of its almost 707,000 acres, yet it lies only an hour from 3 of New England's 4 largest urban areas.  Its 300,000 inhabitants reside only 2 1/2 hours from 25 million people.  This relatively undeveloped rural island in the midst of the most urbanized region in the nation makes it a resource of local, regional, and national importance.

Learn more about what we do by reading our management plan, Vision 2020.

Learn more about The Last Green Valley in, "Statement of Distinction: Why is it Green?" - A Report by Larry Lowenthal, National Park Service retired historian, dated September 18, 2008.

The Last Green Valley was featured on WCVB5's Chronicle in November, 2012 as a mystery destination.

Here are links to the segments:
Guess Ted's Secret Location
Chop a Tree, Taste the Wine
Small Businesses Buzzing on Main Street
Have you Figured it Out?

We rely on your membership contributions and donations to carry out our work. Together, we can care for it, enjoy it, and pass it on.

Become a member, make a donation