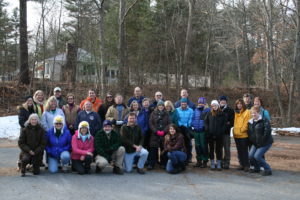 Volunteers sighted 12 bald eagles, with 6 sighted on rivers and 6 on lakes. Most of the eagles arrived in the region during the past month or two from northern states where the cold weather has frozen over rivers and lakes.  Bald eagles are primarily fish eaters, though they have been reported to eat ducks and other prey as well as carrion. They are here because the habitat can support them with excellent food sources, and because most of our rivers don’t freeze completely during the winter months.

Some of the eagles that were sighted are “native.” The Last Green Valley National Heritage Corridor is home to an ever-increasing population of year-round resident bald eagles. . We know of 6 successful bald eagle nesting pairs that have raised and fledged eaglets in the Corridor over the last several years.

The CT Department of Energy and Environmental Protection will crunch all of the information gathered by volunteers to determine the number of individual birds in the area. The detailed data reported by volunteers, such as exact time, location, and movement patterns are all vital pieces of the puzzle.

Brian Hess, CT DEEP Wildlife Biologist and Midwinter Eagle Survey Coordinator, noted, “We see quite a bit of interest and participation in this year’s survey with hundreds of volunteers across the state. Initial responses indicate that the counts are down a bit this year from highs in 2013 and 2014, likely due to warmer weather in December and early January. I’m extremely grateful to TLGV and Bill Reid for all of their help covering big swaths of water in Eastern Connecticut. We couldn’t do this without them, or the help of the hundreds of volunteers statewide.”