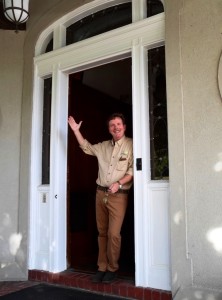 March is Women’s History Month and for the next few weeks this column will feature remarkable women who lived in our region. This year, at the national level, Women’s History Month will focus on women who worked to form a more perfect union and women in public service and government. I hope you will join me in learning about and remembering some of the fascinating and notable women that made a difference in our region, state, country, and world.

Today our focus turns to the Town of Brooklyn and Celia Burleigh. Born in 1826 in New York, little is known about Celia’s childhood, but early in her career she taught and lectured on temperance and suffrage. In 1865 she married William Burleigh, the Harbor Master of New York City, and a well-known reformer and publisher. With the support of her husband, Celia became a national leader in the women’s suffrage movement as well as a devoted advocate for the rights of children.

In 1869 she delivered a paper on the Rights of Children at the Women’s Parliament, reported in the New York Tribune on October 25, 1869.  According to that article, “the lady thought that the first right of every child was to be well born.  Other rights were to be born into a loving atmosphere, to be made physically comfortable, and to breathe pure air.”  Mrs. Burleigh also felt that each child was entitled to a “great deal of judicious letting alone.”

I was fortunate to be raised in a loving atmosphere where I enjoyed a great deal of “judicious letting alone” as I romped through the woods of my neighborhood. Child rearing in the 1950s and 60s was certainly different than it had been 100 years prior, and Celia Burleigh was partly responsible. Along with my brothers and neighborhood kids, we spent many happy days in the out-of-doors until the dinner bell called us home.

In 1871, Celia was invited to be the summer minister at the Unitarian Church in Brooklyn. Her husband had recently passed away and he had always encouraged her to be a minister. She welcomed the opportunity to use her weekly sermon to advance her message.

As a minister she continued her advocacy for suffrage and the rights of children. During the 19th century, thousands of children were employed for up to 10 hours a day in factories. For many children, childhood was not so much to be enjoyed as something to survive.

Sadly, after two years as minister in Brooklyn, she was diagnosed with breast cancer and as a result of failing health had to resign her position. She moved to Dansville, New York, where she hoped the water cure or hydrotherapy at Dansville Jackson Sanatorium would improve her condition. Unfortunately her condition worsened and she moved to Syracuse for additional care. She died in Syracuse in 1875 and her remains were sent to Brooklyn for burial.

The Unitarian Church in Brooklyn is a beautiful building that has been faithfully restored. This past fall I visited the church to attend a Walktober program. Sitting in the pews, I imagined Celia Burleigh speaking and ministering to her congregation. She was a remarkable woman, worthy of our remembrance and honor during Women’s History Month in The Last Green Valley.

My love of the outdoors comes from my childhood, when my parents allowed me to freely roam the woods of my neighborhood. The trees were my playground, and our local pond my fishing and swimming hole. In some small way, perhaps I can thank Celia Burleigh for a childhood full of “judicious letting alone.”

Our region is full of fascinating stories of interesting people. I hope you’ll join me in caring for their history, to enjoy and remember the lessons they impart, and to pass them on to the next generation.

The information on Celia Burleigh used for this column is taken from TLGV’s publication Notable and Notorious: Historically Interesting People from The Last Green Valley and from CTHistory.org, a project of CT Humanities.