The Last Green Valley Looks to the Future 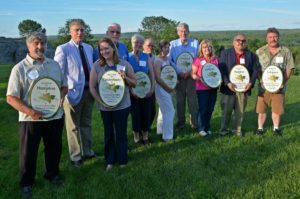 The Last Green Valley Looks to the Future

During the annual business meeting, TLGV Executive Director Lois Bruinooge highlighted last year’s accomplishments but focused most of her remarks on the future. She announced that TLGV is partnering with the Greater Worcester Community Foundation and the Community Foundation of Eastern Connecticut to establish two agency endowment funds specifically designed for nonprofits. These funds are an important step towards the sustainability of the organization and the region. By establishing these funds, TLGV hopes to increase its visibility and capacity to secure major gifts, and to obtain high quality investment management services. These funds will make it easier for donors to feel confident in the long-term stability of the organization, and to ensure that legacy gifts such as bequests will benefit this region into the future.

Bruinooge and Chairman of the Board Bill Jobbagy also thanked all of TLGV’s members, donors, partners, and volunteers for their support, and presented TLGV’s annual awards. Alix McNitt from the Chamber of Central Mass South was recognized for her service on the TLGV Board from 2012-2016. Roland Beland was recognized for his support of the water trails program, going above and beyond in supervising carpentry students from Harvard H. Ellis Technical High School during construction and installation of 16 information kiosks at public canoe and kayak launches on the Quinebaug, Willimantic and Shetucket Rivers.

Mike Nelson, Community Service Supervisor for Charter Communications, was presented with the “Voice of the Valley” award for providing innovative, outstanding, and in-depth coverage of issues that matter in The Last Green Valley, and for guiding or directing thousands of local programs.

The final award was the announcement of “Team Walktober 2016,” bestowed upon Dianne Brown & Regan Miner from Norwich, for their leadership in creating so much Walktober excitement in the city and for inspiring so many other communities to follow their lead.

Representatives from many of The Last Green Valley’s communities were also on hand to receive new welcome plaques suitable for hanging outside their town halls, to let residents and visitors know that they are within a Last Green Valley National Heritage Corridor Community.

TLGV would like to thank the Langevin family from Allen Hill Farm for working so hard to get ready for this event and for donating their spectacular facility; Renee’s Working Girl Catering for the delicious food; and Dr. Nick Bellantoni for once again donating his time and expertise in an engaging program.