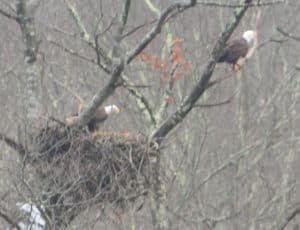 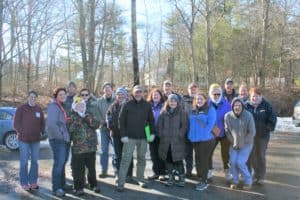 Eagles on the Shetucket River taken by Mike Nelson during the Midwinter Eagle Survey Jan. 13, 2018.

On Jan. 13, 29 volunteers surveyed 31 locations. The number of volunteers was down due to weather concerns. Despite decreased participation, the number of eagle sightings increased. There were 26 sightings of eagles along the Quinebaug and Shetucket rivers and several lakes and ponds, up from 12 sightings the year before.

The sightings included adult bald eagles, some of which are known to nest in the national heritage corridor, juvenile bald eagles and at least one juvenile golden eagle.

“This is a great example of citizen science,” said TLGV Chief Ranger Bill Reid. “People who love and enjoy the region come together to document the eagles. These birds are good indicators of the health of our waterways and that is critical to all of us.”

Reid said TLGV began participating in the survey in 2010 as a way to draw attention to the wonderful attributes of the National Heritage Corridor while showing in a tangible way how the organization’s work on water quality has improved the health of area waterways, making it hospitable to the bald eagle once again.

The CT Department of Energy and Environmental Protection will crunch the information gathered by volunteers to determine the number of individual birds in the area. The detailed data reported by volunteers, such as exact time, location, and movement patterns are all vital pieces of the puzzle.