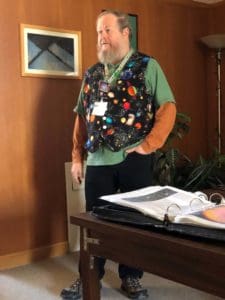 Geoff McLean, a long-time volunteer Ranger for The Last Green Valley, Inc., was recently accepted into NASA’s prestigious Solar System Ambassador Program. McLean, who has run astronomy programs for TLGV for many years, will now have access to cutting edge NASA research and programs and be able to share that information with everyone who attends his programs.

“I have learned so much in just the last few months,” McLean said. “I have had direct access to the NASA scientists doing the research. It’s pretty incredible.”

McLean, a Norwich resident, is a retired engineer and former naval officer. He worked for Electric Boat and other local contractors before opening his own firm, McLean Research Associates. Geoff met his wife, Kim, while both worked at EB. They have a daughter, Libby.

It was while assisting with Libby’s Girl Scout Troop that McLean’s passion for astronomy was rekindled. Libby was one of two Girl Scouts in the state invited to participate in a trip to NASA’s Goddard Space Center in Washington D.C. Part of the program was to return home and start an astronomy club. While Libby is now an adult, Geoff and Kim still work with Girl Scouts and the astronomy club.

“I was always interested in space,” Geoff said. “As a kid I wanted to be an astronaut but I don’t have perfect eye sight, so it wasn’t possible.”

Bill Reid, TLGV’s Chief Ranger, said McLean as been a tremendous asset since he first began volunteering for TLGV.