For the sixth year in a row, 35 hearty volunteers braved the bitter cold to count bald eagles during the Midwinter Eagle Survey on January 10. TLGV organized teams at 20 different locations on the Quinebaug, Shetucket, Willimantic, and Natchaug Rivers, as well as 11 lakes and ponds where eagles have been known to congregate. 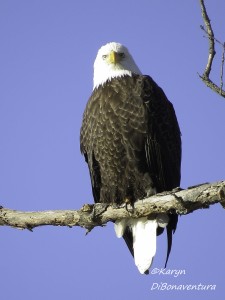 A proud resident of The Last Green Valley, this bald eagle was fishing for breakfast on the Quinebaug in Putnam. Photo by K. DiBonaventura.

A record number of bald eagle sightings – 32 – rewarded TLGV volunteers during the early morning count. Of these sightings, 19 were adults and 13 were brown-hued immature eagles. It can take up to 5 years for immature eagles to develop their distinctive white head and tail.

It’s now up to staff from the CT Department of Energy and Environmental Protection to determine the number of individual birds in the area, based upon the detailed data reported by volunteers, such as exact time, location, and movement patterns. TLGV estimates that at least 10 and perhaps as many as 15 individual eagles were present that morning.

Bald eagles are primarily fish eaters, although they have been reported to eat ducks and other prey they can capture. They winter in The Last Green Valley because our rivers are not typically frozen over and provide excellent food sources. Many of the eagles sighted in January arrived in The Last Green Valley over the past two months from northern states.