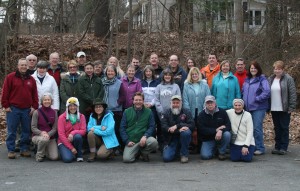 Fifty wide-eyed volunteers looked skyward during the early-morning hours of January 9th to record bald eagle sightings in The Last Green Valley as part of the Midwinter Eagle Survey. The Last Green Valley, Inc. (TLGV) has organized teams of volunteers for seven years, and this year, they scouted 24 different locations on the Quinebaug, Shetucket, Willimantic, and Natchaug Rivers, as well as 10 lakes and ponds where eagles have been known to congregate.

Due to the mild winter temps throughout New England in November and December, the number of bald eagle sightings by TLGV teams – 20 – was lower than last year but expected because so many of our lakes and ponds were not frozen over. Wintering eagles look for food in open waters, and without ice narrowing their dining locations, those eagles have had plenty of open waters to spread out and fish this year.

Both adult and brown-hued immature eagles were spotted during this year’s count. The adults sport distinctive white heads and tails; it can take up to 5 years for immature eagles to develop those features.
The CT Department of Energy and Environmental Protection will now crunch all of the information gathered by volunteers to determine the number of individual birds in the area. The detailed data reported by volunteers, such as exact time, location, and movement patterns are all vital pieces of the puzzle.

Bald eagles are primarily fish eaters, although they have been reported to eat ducks and other prey as well as carrion. They winter in The Last Green Valley because our swift rivers are not typically frozen over and provide excellent food sources. Many of the eagles sighted in January arrived in The Last Green Valley over the past two months from northern states and usually fly back in late February.

Brian Hess, CT DEEP Wildlife Biologist and Midwinter Eagle Survey Coordinator, noted, “The Last Green Valley is a pristine and vital part of Connecticut’s diverse habitats. Its open space and clean waters make it an excellent home for eagles, and the area has played an important role in the recovery of eagles in Connecticut. The staff and volunteers of TLGV continue to be a great help and knowledgeable asset to the state’s efforts to monitor wintering and nesting bald eagles.”